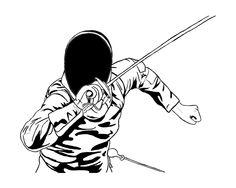 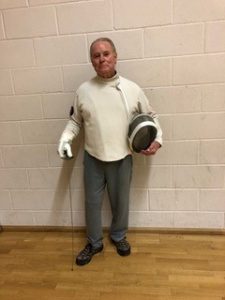 I joined the Royal Marines (RM)in 1959 & had his first fencing lessons by the RM coach in 1966. Attended the A.F.A coaching course at the Royal Army Physical Training Corps held at Aldershot barracks, where there were 8 students on the course. The Syllabus was composed by Professor Bob Anderson, who was the senior National Coach for Great Britain& Northern Ireland.

Successful students would be awarded their intermediate (one grade below advanced) coaching certificates. To achieve the advanced coaching award we were advised to coach for a minimum of three years a high level before applying to attend Professor Andersons advanced coaching course of 14 days.

One had to pass all three weapons at advanced level to be awarded your advanced coaching certificate. On completion of the advanced coaching course, only two students would be selected to take the examination, which started at 09.30 & usually complete by 16.00hrs. The examiners consisted of three professors – Leon Hill M.B.E., Geof Hawksworth & Ken Pearson.

I passed my advanced course (only 1 every 3 years passed) and the British Academy Fencing (BFA) invited me to join as a Provost Master (one below Professor). in 1982 the position of Senior National Coach became vacant, myself and 2 others were short-listed and interviewed but because I was still serving in the RM, I was unable to accept this post.

I have  coached all over the world including:- Singapore, Malaysia, France, Holland, Falklands, Buenos Aires and Oman, as well as Exeter and Surrey Universities.

I have a unique, excellent, people skills in coaching,  managed over the years to teach pupils who have gone onto represent Great Britain at Junior and Senior levels & also coached several at senior level in the Pentathlon.

When asked about his teaching style, his humble answer was ‘ I must give full credit to my former coaches, who I stand on their shoulders for all their coaching advice that they have given me, especially to Professor Bob Anderson, known as The Sword Master.’

Fencers travel miles to be taught by this lovely Master. 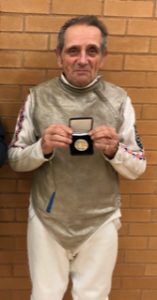 As a person, I have to accept that physically I am not very well co-ordinated and still even have a problem with a skipping rope! Which I guess underlies why in School I was not very good at team sports. Swimming, X-country, rifle shooting, trekking – yes those I could do, but cricket and soccer – no way!

Which is also if in my younger years anyone had said, that one day I would represent GBR in a sport, I would have said they were sheer nuts. Yet this is what I did and the key lay in fencing. I started in my mid 30’s, when with a colleague we both enrolled in an adult education class. What enthralled me was this combination of your physical and mental energies.

Some describe fencing as being like a high speed chess game – it is this element of misleading your opponent upon your intention, that makes it so exciting, challenging and at the same time, so enjoyable  to do! I can finish my day’s work feeling spent, but as soon as I have picked up a sword, the adrenaline flows: I feel 20 years younger and by the end of the evening, completely relaxed. Any problems of the day are no longer significant and I feel I am of the top of the world.

It was at fencing that I met my marvellous wife and then because of the extra time spent in bringing up a family and being founder parents of a Steiner/Waldorf School, I did not fence for some 20 years.

Watching TV one evening, I saw Corinna Lawrence from Plymouth fencing and who at time was representing GBR in the National team.  Just watching was enough, to remind of the joy of the sport and I started again at the age of 55.  It was about this time that a veteran fencer, Henry de Silva initiated Veterans Fencing and before long we had European and World Veteran Championships.

What makes fencing somewhat exceptional and I guess arises from it a being a close combat sport, is that even now in my 80’s, I can still be a challenge to a young person of 20! Purely by trickery and tactics and what such tremendous fun!

So whatever your age, do not write yourself off as useless at sport – like for me, fencing may provide the key to find abilities, that you never dreamt you had! Why not give it a go? 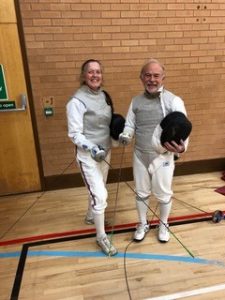 Andy started fencing with Bath Sword Club in 1966 initially with foil then sabre. It was a very friendly and active competitive club with about 20 members.  Lynne started in 1973 and we got married in1977. During the next 40 years we together with the rest of the committee built a highly respected and successful club. We devoted many hours of our time looking after new fencers and  running most of the junior and adult courses. Lynne with her teaching skills coached at many schools in Bath, sometimes as many as 8 or 9 per week.which fed more members into the Club. Club membership grew to over 200 with the club employing 6 professional coaches and training was on 18 to 20 electrical boxes. We ran 24 competitions for club members each year. When Andy retired we formed a double act. We taught hundreds of children over the years. We were very proud when some of them achieved excellent results in age group competitions and were selected to represent the Great Briton Squad. Two were on the “Olympic Pathway” elite squad training for London 2012 and another became World U20 Epee champion.

Andy  has been County and South West Captain and has achieved a range of results in Club, County, Section, National and International competition:

1978  Winner of the National Coaches Trophy

1985  Awarded England Colours by fencing in the quadrangular.

In 2001 We were both awarded Bronze medals by British Fencing Association for services to fencing.

She has also fenced in nine Veteran World Championships best result was a Bronze medal  for Sabre in Tampa, Florida in 2005

In 2014 we moved to Devon to see our grandchildren  grow up where we are now  members of Newton Abbot Fencing club.